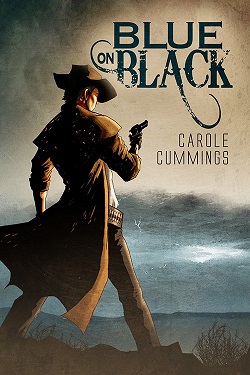 Now available in ebook and paperback from
DSP Publications, Amazon,
and most other major retail outlets.
Kimolijah Adani—Class 2 gridTech, beloved brother, most promising student the Academy’s ever had the privilege of calling their own, genius mechanical gridstream engineer, brilliantly pioneering inventor... and dead man. But that’s what happens when a whiz kid messes with dynamic crystals and, apparently, comes to the attention of Baron Petra Stanslo. Killed for his revolutionary designs, Kimolijah Adani had been set to change the world with his impossible train that runs on nothing more than gridstream locked in a crystal. Technically it shouldn’t even be possible, but there is no doubt it works.

Bas is convinced the notoriously covetous and corrupt Stanslo had something to do with Kimolijah Adani’s tragic and suspicious end. A Directorate Tracker, Bas has finally managed to catch the scent of Kimolijah Adani’s killer, and it leads right into Stanslo’s little desert barony. For almost three years, Bas has tried to find a way into Stanslo’s Bridge, and when he finally makes it, shock is too small a word for what—or, rather, whom—he finds there.
Tags: blue on black, dspp, fantasy, m/m, publishing, sci-fi, steampunk
Subscribe